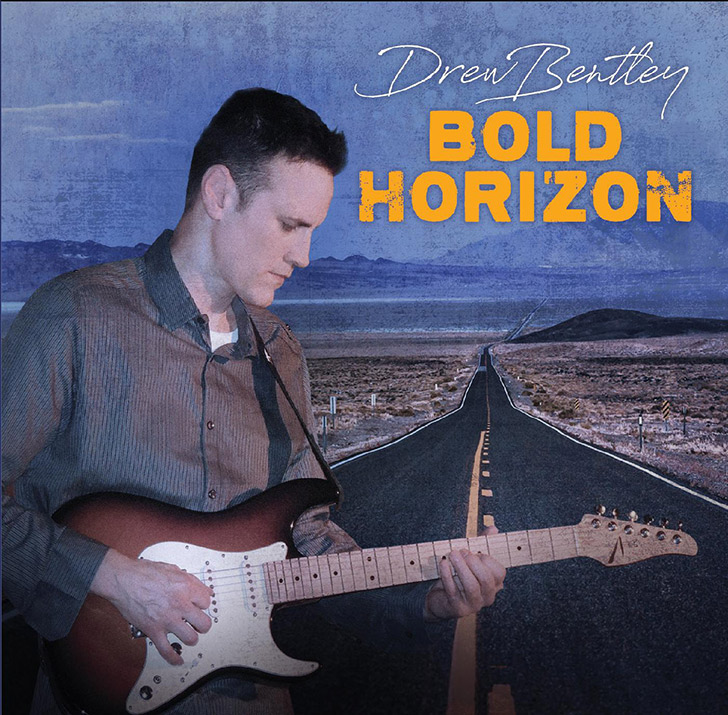 There is nothing better than having your work reviewed by people who are in the industry. I have received a couple album reviews for “Bold Horizon” thus far.  Please look for a review of the JD Strum album, “Just Another Story”  as well in the post titled JD Strum.

Sunday, July 14th, the fabulous D.J. Jim Price from 105.9 QWIK did an album review of “Bold Horizon”  in his “Professor’s corner” Below is the written copy of the review along with a video of the “On Air” reading of the review. Jim then played “Muscle Car” on the show.

Drew Bentley has been an active part of the Pittsburgh music scene during the past two decades, performing in various bands and also co founding the regionally popular band JD Strum. Drew has embarked on his first solo album venture called Bold Horizon, an album where he explores frontiers of rock jazz and blues, armed with his guitar. An all instrumental album, “Bold Horizon” features ten distinctive compositions that blend and vary between genres, and through the fusions capture a myriad of moods. Backed by drummer Brian Edwards, bassist George Elliott and Keyboard player Scott Anderson, Drew works his guitar strings turning his instrumental displays into an extension of his personality at any given moment. He can clearly shred demonstrated on tracks such as this number your now hearing called “Carpe Diem” Drew stretches out and tests bold horizons with this multi flavored exploitative rocker called “Distant Worlds”. Blues becomes Drew’s frontier on this number your now hearing called “Cloak And Dagger” while mild repertoire jazz informs the next track you’ll hear called “Daydreams”. Through it all, Drew shows obvious fluency and prowess with his guitar work which is tasteful and serves each composition never becoming over indulgent or over obsessive. Recorded using several studios and engineers and produced by Drew, “Bold Horizon” sounds clean, clear, vibrant and full. Whiles Drew’s guitar is the prominent voice, the sound is balanced and all four musicians sound distinctive in the mix. Drew Bentley’s first fore into the solo album, “Bold Horizon“,  is a successful one and the album “Bold Horizon” provides an inspiring, invigorating listening journey for guitar proficinados  and casual fans alike, you can get the CD  through Drew’s website www.drewbentley.com from the album, let’s hear Drew Bentley with one called “Muscle Car” on the Homegrown Rocker…

Lion countries rock station 105.9QWIK ROCK and the Homegrown Rocker, music from Drew Bentley, out of the Pittsburgh area and a track called “Muscle Car” which you will find on the CD we just reviewed in the Professor’s CD corner. The album is called “Bold Horizon” and as I said during the review; Strong overall album. If you like good guitar, rock and good guitar playing, your going to like what Drew is doing on the “Bold Horizon” album, he gets into a number of different styles, blends them all together vary smoothly. Very solid musicianship throughout the album, I definitely like it and if your a fan of guitar music you definitely want to check it out. You can get the CD through Drew’s website which is drewbentley.com Drew, by the way, also has his band project JD Strum still going although these days it’s more of a duo with his songwriting partner Jeff Marks. JD Strum was just in action last night at a place called the Double Wide Grille in Irwin, that’s near Pittsburgh.

Few records are capable of defying a specific genre while retaining an ongoing cohesiveness to the album. But guitarist Drew Bentley’s self-produced, Bold Horizon, is aptly named due to each track taking on its own vibe best described as “thoughtful arrangements unto themselves,” yet cohesive enough to form a solid collection of work. Fans of instrumental guitar in the vein of Eric Johnson/Andy Timmons/Prashant Aswani/Steve Morse will find something to like in each of these tunes.

Bentley employed the help of Brian Edwards on drums, George Elliot on bass, and Scott Anderson on keys. The Fuchs and CARR amps Drew uses throughout (and numerous guitars) are well mannered, recorded traditionally with a great mic into a great preamp. This translates beautifully in the recordings.

Showing off a keen sense of melody, there is an underlying mastery of the guitar that is apparent in each track. Never too over the top, you will not find any licks or tricks here that are impossible to execute without three hands. The record is approached with thought to the song, as opposed to something to prove and dazzle an attention defunct listener. Bluesy, hard rock and smooth jazz type melodic themes do not struggle for space, but coexist harmoniously—often in the same song. The songs are allowed to breathe and the parts are well thought out to flow nicely into one another.

This is a great sounding recording, with excellent balance, depth and polish, and the drum sounds are particularly impressive, sitting a bit forward in the mix (in a nice way). At times, we wished the guitar was a bit more up front, though. This record is a solid effort, though, and well worth a listen. Thoroughly enjoyable.

Thanks for taking the time to read about what these indusrty professionals are saying about the “Bold Horizon” album.

You can purchase the album by clicking here.

Please feel free to leave a comment below, maybe even a review of your own. I’d love to hear from you!

There are no comments yet, add one below.